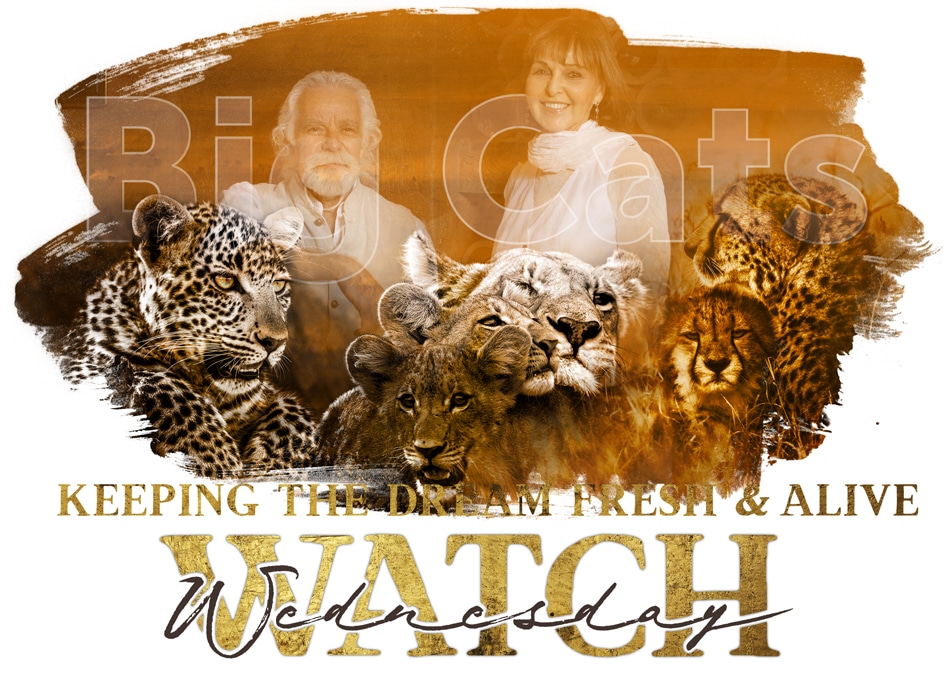 In the Footsteps of Big Cats

We wait for this week every year. During the first week of February, National Geographic celebrates big cats across the globe. When Beverly and I dreamed up the idea of the Big Cats Initiative as a joint venture with National Geographic, it was as an emergency intervention based on the falling numbers of these magnificent creatures. The intervention was also designed to recognise how vital these big cats are to everything around them and us.

This week is Big Cat Week in the USA and starts Big Cat Month internationally, and this ‘season’, we are bringing you a collection of 7 films worked on during the pandemic.

For those who need any inspiration at all, any stimulus to pack and get out to Africa to see these cats, this may be just what you need.

We surveyed which of our earlier films were the most popular and could do with a re-release and then settled on six of them – Eternal Enemies, Relentless Enemies, Ultimate Enemies, Eye of the Leopard, Living with Big Cats and Big Cat Odyssey

We then pulled each movie apart in the editing room, remastered each shot for better quality, added footage where necessary, changed all the music and script and then once again knocked on Jeremy Irons’ door to see if he would narrate all of these films for us. The conversation was short, “Of course!” So with lockdown rules and Zoom, Jeremy added his voice and refreshed this package of films with new scientific information. The films are all going out on National Geographic WILD and will also feature on Disney+.

The original films were shot in Botswana, some from Duba Plains, and many include Selinda, where we have camps under the banner of Great Plains Conservation.

At the same time, we are premiering a new film, The Way of the Cheetah, during this Big Cat event. This was filmed in Kenya’s Olare Motorogi and Naboisho Conservancies north of the Maasai Mara. It features five extraordinary male cheetahs and Immani, a single cheetah mother and her four cubs. We are still seeing Immani regularly in the area.

As we were preparing these films for release, one executive at Disney+ said, “Hey, I would love to visit each place you filmed in.”

And an idea was born to connect the dots and offer safaris based on the best of the best, in the Footsteps of Big Cats including Duba Plains (for lions), Duba Explorers Camp (for all cats), Zarafa (for leopards) and then Mara Plains Camp, Mara Nyika Camp, and ol Donyo Lodge. All these safari camps are unique, each with a cast of big cat characters we would love to introduce you to.

At each of our camps, we regularly show our films outdoors. At one recent screening of a lion film, we had to hustle everyone a little closer to fire because two male lions decided to answer the roars heard on the film’s soundtrack before coming to see for themselves. Fortunately, it was their roars they heard and left without shredding the screen.

The very core of Great Plains overlaps with Big Cats, where we established ourselves by looking at a map of where big cats existed, where they may be most threatened, and where we could offer the finest big cat viewing experiences whilst doing the most to protect them.

The National Geographic Big Cats Initiative has been a huge success if a study by Duke University BCI group is indicative. Over 4,000 lions are reported to have been saved, and over 150 grants issued in 29 countries! Watch this space for exciting plans at the Great Plains Foundation around big cat conservation in the upcoming months and how best to support this effort in the future.

I hope that our seven films inspire or remind you, refresh your dreams of returning to Africa, and make you fall in love with these incredible animals all over again.